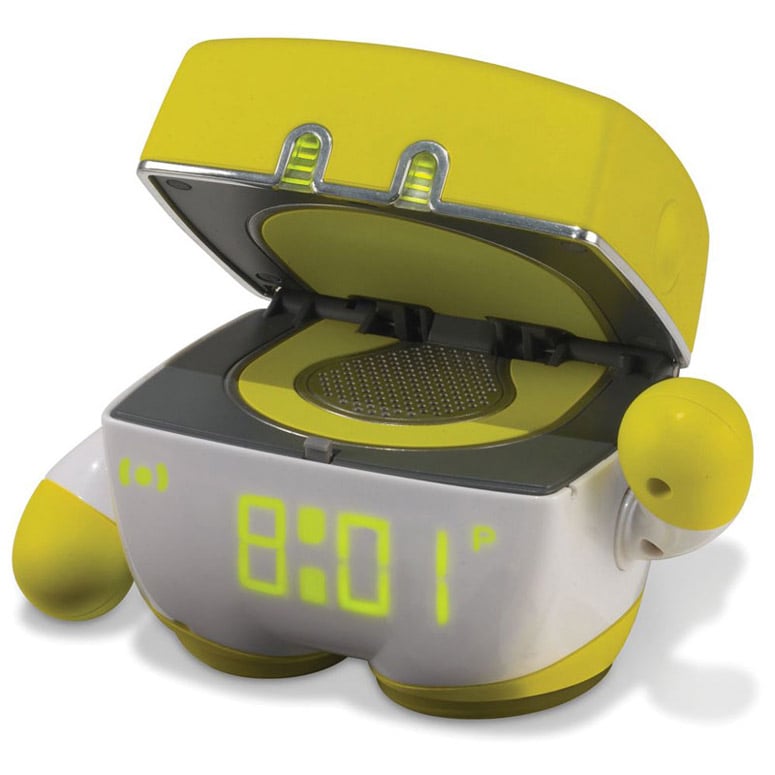 The trouble with alarm clocks for me is that once I adapt and get used to the wake-up beep, I become completely immune to its irritability and just cancel it out. I really need an alarm clock that goes a bit further and makes a little extra effort in its attempt to get me out bed in the morning. I found something interesting.The Room Tech Beingz - Temper Tantrum Throwing Alarm Clock is probably one of the most annoying and, at the same time, charming alarm clocks ever created. At first, it attempts to pre-awaken you gently by glowing about 5 minutes prior to the alarm. If the light doesn't do it, the initial alarm goes off and it taps its arms lightly. However, if you don't awaken and hit the snooze button within a minute, it gets really upset and throws a full scale raging temper tantrum. It goes crazy, pounds its fists and shouts and whines out its alarm for around an hour. I'm pretty sure this madness on my nightstand can stir me from my slumber. When not in its evil alarm mode, this clock is actually quite friendly. It dances to music played from its radio or connected MP3 player by swinging its arms and flashing its lights. Plus, like any good obedient alarm clock, you can pet it on its head sensor and it smiles and taps its little fists in appreciation.It's definitely a cool alarm clock and looks like fun, but I fear it will be brutally executed against the wall two minutes into its temper tantrum routine. If you show more mercy with your alarm clocks, this may be for you.

► Amazon.com
► EntertainmentEarth.com
When you buy through links on this site, we may earn an affiliate commission. As an Amazon Associate we earn from qualifying purchases.

Instant HEPA Quiet Air Purifier, From the Makers of Instant
Amazon.com
$69.95
View all items on Amazon.com ►