◎Find It
Monopoly for Millennials
Back: Motion-Activated Gift Alarm - Catches Snoopers in the Act 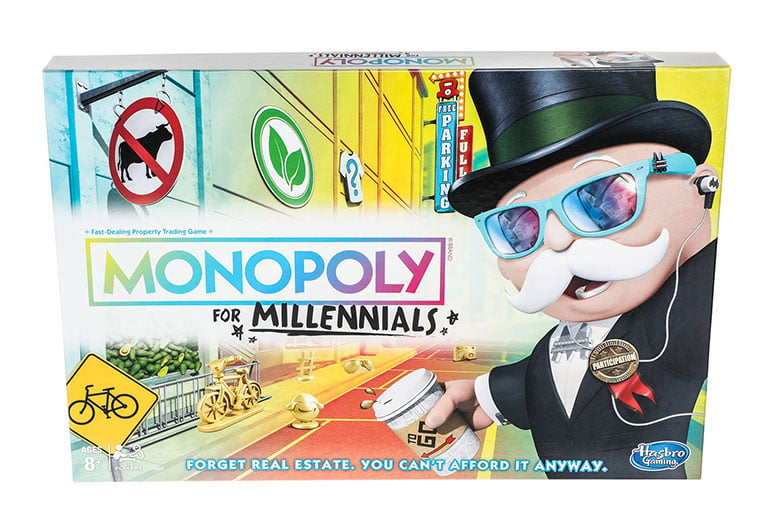 I feel like I should do this post only in emojis or hashtags or something, but I'm just not that woke. Do you cringe and shake your head in disbelief every single time you hear about another new Millennial problem? Do you think it's hilarious when sensitive Millennials get offended and triggered by something as simple as a board game? Well, as expected, this cool new Monopoly for Millennials has real Millennials outraged on Twitter... again. I didn't even have to double check. No other generation really cares why though, because they're too busy playing this game, which, as of this writing, is not yet banned.

In this version of Monopoly, collecting the most money to win the game has been replaced with who has the most experiences at the hottest, most lit destinations, like a Friend's Couch or the Vegan Bistro. The tokens have been changed to a selfie camera, hashtag, crying emoji, bicycle, a rich white guy, and a pair of shades (the sunglasses, not the diss). From the pictures, it's hard to tell all of the changes and fun little jabs, but I just can't understand how a Snowflake token wasn't added, why Monopoly money wasn't changed to a cryptocurrency, and why the jail wasn't replaced with a Safe Space? Hopefully, there are participation ribbons to hand out after the game ends though. 😭❄️

► Walmart.com
► Amazon.com
As an Amazon Associate we earn from qualifying purchases. When you buy through links on this site, we may earn an affiliate commission.