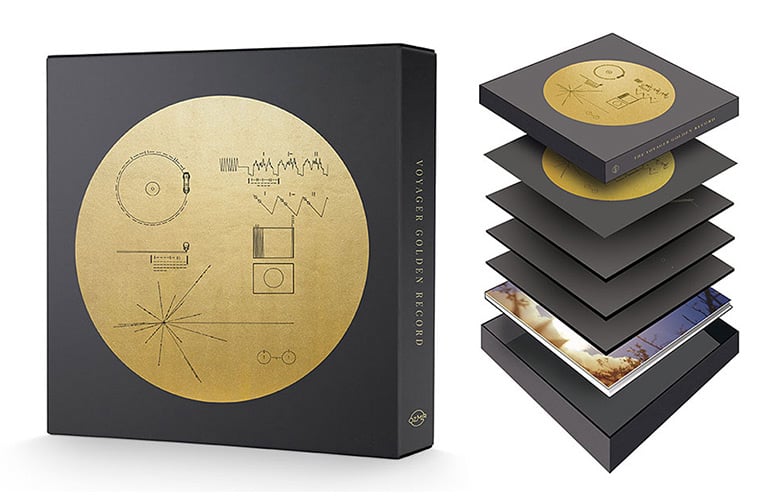 Next: Compacting Garbage Can

A long time ago in this galaxy, before the dark times... before the Empire, NASA launched the Voyager 1 and 2 space probes out into interstellar space. On these probes were gold-plated audio-visual discs filled with photos, sounds of the Earth, music samples, greetings in 60 languages, scientific information, and vague how-to diagrams etched on the front for future alien civilizations to access via an included stylus. I lived on this planet in the time of records and still can't make any sense of the instructions, but the idea is that an advanced species might be able to. Why they didn't just include a full turntable too, only Carl Sagan would know.

Anyways, history now seems to be repeating itself and 21st century Earthlings have rediscovered analog vinyl records, so this cool new yet very retro Voyager Golden Record Vinyl 3 LP Box Set seems appropriate once again. Forget the gold records musicians used to receive and hang on the walls, because the ultimate gold records are on the Voyager probes and now you can listen to them in the comfort of your very own home. This incredible set includes 3 translucent gold 140 gram vinyl LPs in poly-lined paper sleeves with all the sounds and music remastered from high-resolution digital transfers of the original Golden Record tapes, a 96-page softcover book containing all the images sent, a gallery of the images transmitted back, a square gold foil print of the Voyager Golden Record cover diagram that makes no sense to me, a turntable slipmat featuring a NASA/JPL-Caltech diagram of the Voyager spacecrafts' trajectories across the solar system, and more.

While this vinyl record set is not quite as collectible as the originals, this re-issue is definitely a unique piece to add to your modern day record collection and hopefully those originals won't be discovered by hostile aliens who'll use the information to find us, invade us, and steal all our resources. Or worse, one of the probes gathers too much information and transforms into mysterious and immensely all-powerful entity with a twelfth-power energy field known as V'ger that was probably the origin of the Borg. Hey, if you're a Star Trek fan, you already know about these golden records and the reference, so there you go.

► Amazon.com
► OzmaRecords.com
When you buy through links on this site, we may earn an affiliate commission. As an Amazon Associate we earn from qualifying purchases.