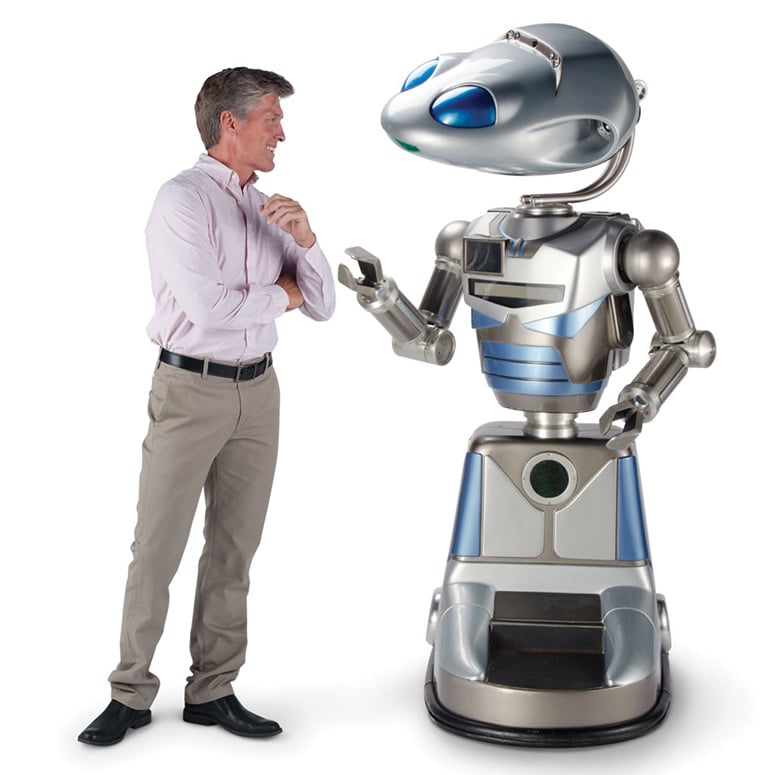 It's the 21st century and we still don't have fully autonomous, artificially intelligent robots pampering us like Uncle Paulie's awesome SICO Robot did in Rocky IV way back 1985... or do we? The cool new Millennia Robot from International Robotics, Inc. is made by the same company who made SICO a movie star and this is the next generation model ready to entertain you. Primarily designed for rental appearances at trade shows, conferences, concerts, film and television (only robot in the world to be a member of the Screen Actors Guild), sponsored events, and more, it can also now be purchased outright as the coolest new member of your family (or just rent it out for income too). While it won't fetch you beers automatically like in Rocky IV, this massive lifesize robot can be covertly remote controlled to act very lifelike, intelligent, and verbally social. It can roll around, fluidly move it's head, torso, and multi-jointed arms, dance (even with a partner on its platform), speak through a synthesized voice, play music through six speakers, and much more. It's designed to convince anyone engaging with it to seemingly have a real personality and can even be pre-programmed to perform routines.At a whopping $345,000, it's still priced mainly for heavyweight boxing champions and others with plenty of cash to spare or invest with, but maybe you'll get lucky like Uncle Paulie and get one as the ultimate birthday gift instead of the sports car you wanted. Check out this VIDEO to see it in action! Cool huh?

► Hammacher.com
► InternationalRobotics.com
► Find It On Amazon.com
When you buy through links on this site, we may earn an affiliate commission. As an Amazon Associate we earn from qualifying purchases.