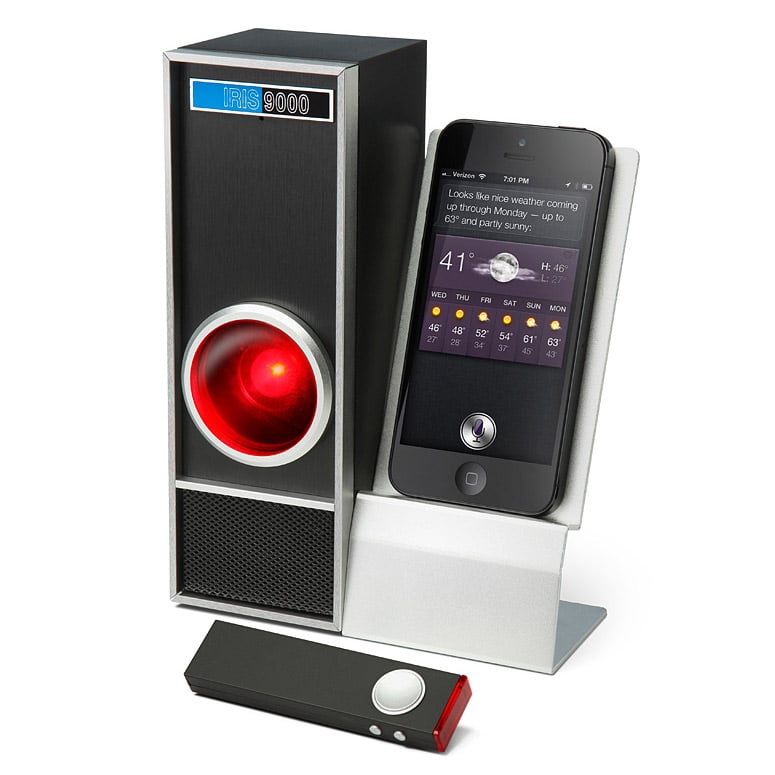 It won't open the pod bay doors and I don't think it's capable of murder, but the cool new IRIS 9000 puts us one step closer to 2001, even though we're way, way past that. This ingenious product by the cool people at Think Geek combines the futuristic aspect of a psychotic supercomputer housed in a massive spaceship orbiting Jupiter that's more concerned with talking to alien Monoliths than you and the compact, convenient and pleasant nature of the artificially intelligent Apple iOS SIRI assistant. Yes, SIRI is IRIS spelled backwards. Just place your iPhone into the docking cradle of the IRIS 9000, use the included micro remote button to trigger SIRI (I know, somehow buttons are still needed) and speak your commands and questions. The built-in mic picks up your voice at a distance and the embedded speaker amplifies SIRI's responses, while the ominously glowing red eye flickers and stares back at you. It can even be used as a standard speakerphone to make and receive calls, but unfortunately it can't read lips...yet. An absolute must-have for sci-fi geeks and anyone else glad to finally be arriving in the future we were all promised and sort of getting.

► Amazon.com
When you buy through links on this site, we may earn an affiliate commission. As an Amazon Associate we earn from qualifying purchases.