The Haunted Ebay Painting - 'Hands Resist Him' by Bill Stoneham 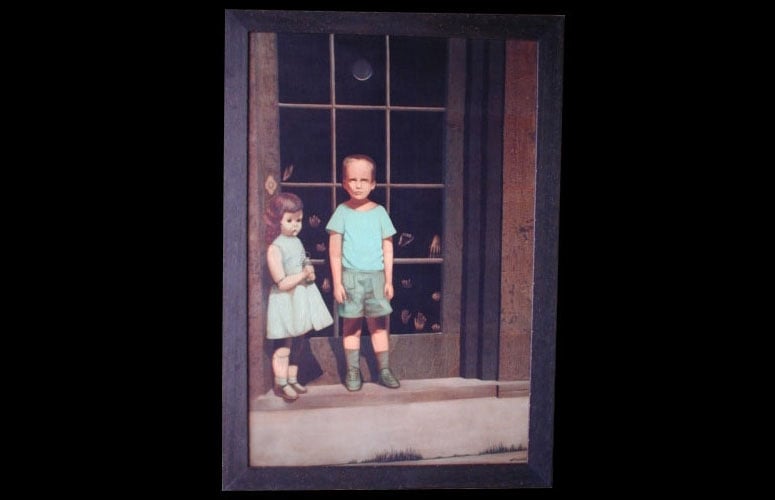 The Haunted Ebay Painting - 'Hands Resist Him' by Bill Stoneham

Excerpt from the Hands Resist Him : Haunted eBay Painting listing from February, 2000:"...when we received this painting, we though it was really good art. A "picker" had found it abandoned behind an old brewery. At the time we wondered a little why a seemingly perfectly fine painting would be discarded like that. (Today we don't !!!) One morning, our 4 and 1/2 year old daughter claimed that the children in the picture were fighting and coming into the room during the night." The painting is titled Hands Resist Him and was originally painted by Bill Stoneham in 1972. He doesn't know how the painting made its way onto eBay, but does know that both the owner of the art gallery where it was originally on display and the Los Angeles Times critic that reviewed the show we're both dead within the year. Legend also has it that many "people report feeling ill and passing out, having strange visitors in the night or having their children cry out in horror" upon witnessing it. I would like to add to the rumors, because the first night after seeing this painting on the Internet, I had a terrifying dream about being attacked by an unseen yet animalistic presence that was horrendously screeching and growling while it pinned me beneath the bedsheets trying to crush me. It was the most vivid dream I've ever had... if it was even a dream at all.So, is this painting really haunted? Who knows, but we'd love to hang it over the watercooler here in the Green Head HQ break room and find out... maybe. Exact replicas are now available Bill Stoneham's Official Website as well as the cool sequel Resistance at the Threshold.

► StonehamStudios.com
► Find It On Amazon.com
When you buy through links on this site, we may earn an affiliate commission. As an Amazon Associate we earn from qualifying purchases.

A Soul Haunted by Painting
Amazon.com
$49.99