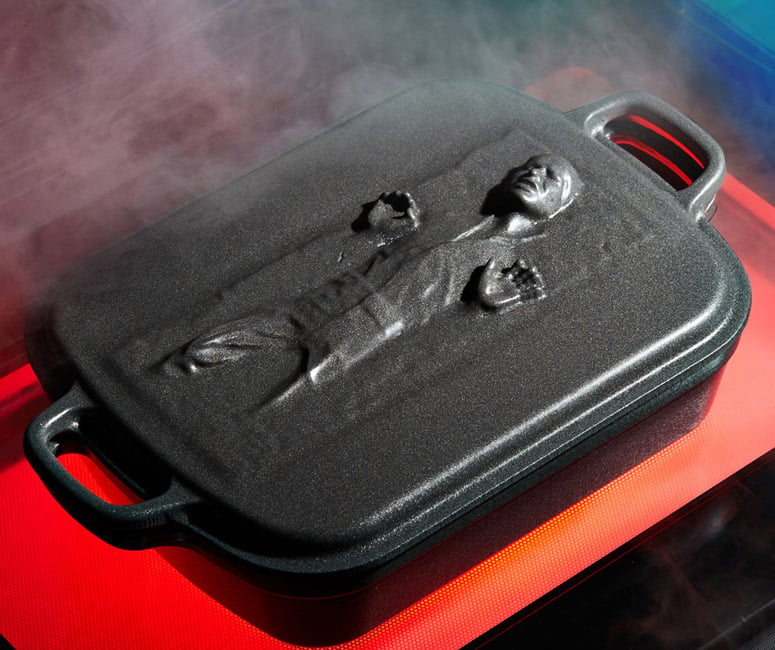 "We would be honored if you would join us." - Darth Vader (The Empire Strikes Back)

No matter whether you'll be cooking up and serving casseroles to honored guests at Cloud City on the planet Bespin or just to a bunch of Star Wars fans here on Earth, do it in this cool new Le Creuset Star Wars Han Solo Frozen in Carbonite Roasting Pan. No, this limited edition Le Creuset roasting pan isn't crafted from actual Carbonite which is found in a galaxy far, far away, but it does have a lid with Han Solo frozen in stone-grey enamel-finished cast iron. It features even heat distribution, even when cooking Ewoks, a shock-resistant enameled exterior, wide loop handles, and the iconic Le Creuset embossed "France" label translated into Star Wars Aurebesh characters. Made in France, but probably not by Ugnaughts.

► Williams-Sonoma.com
► Find it on Amazon.com
As an Amazon Associate we earn from qualifying purchases. When you buy through links on this site, we may earn an affiliate commission.