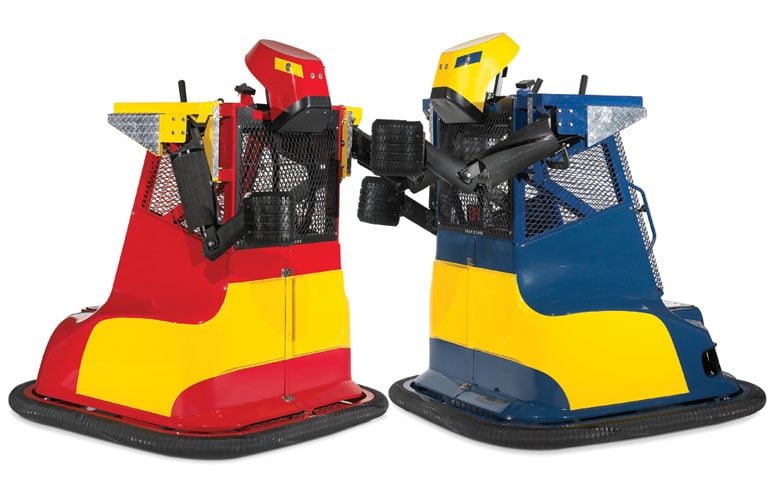 Since I was a kid, I've dreamt of seeing giant killer robots square off in the boxing ring to brutally crush each other into junkyard scrap metal and now in the 21st century I finally can... well, sort of. These cool new Motorized Boxing Bumper Cars let two human combatants slug it out as roving robotic machines. After you and your opponent slip inside the protective steel cage cockpits of your battle bots, grab the thumb-triggered buttons on the two independent joysticks to control the two pneumatic-powered, tire-tread-fisted arms and unleash a punishing onslaught of rock 'em, sock 'em uppercuts. To score a point, just aim for the other robot's head and knock it backwards and you can keep track of your score on the front-mounted display on each robot's mid-section. Each robot features a Honda gas engine that powers hidden wheels up to 3 mph forward, backward, left and right, a sturdy steel frame with fiberglass and aluminum body panels and a five hour fuel capacity for uninterrupted bouts. They're only $17,000, so a fun and affordable stocking stuffer for the 1%.

► Hammacher.com
► Check Amazon.com
As an Amazon Associate we earn from qualifying purchases. When you buy through links on this site, we may earn an affiliate commission.

Squid on Strike / Sandy, SpongeBob and the
Amazon.com
$1.99