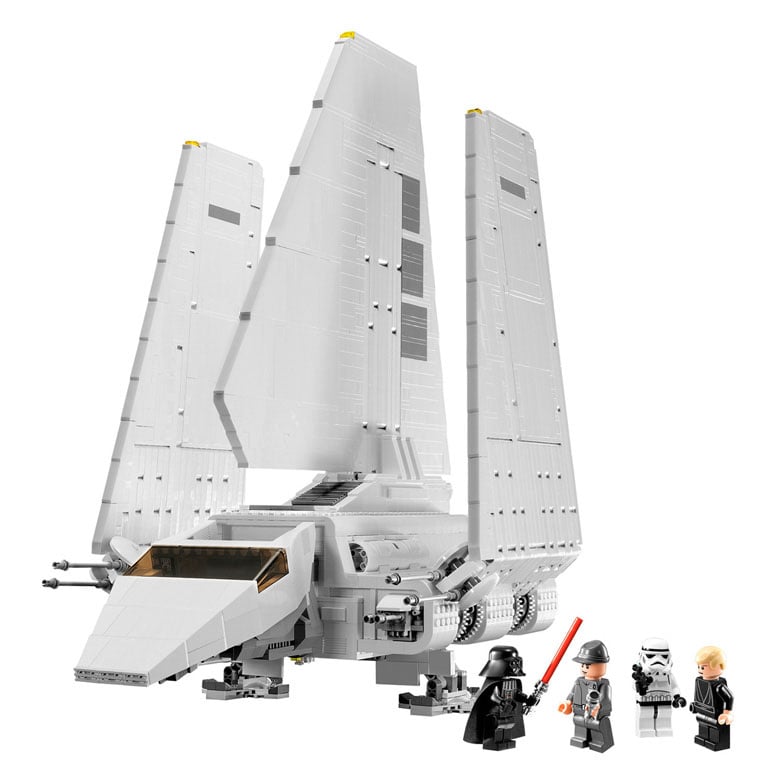 Yea, well I don't think the Empire had Wookiees in mind when they designed her, Chewie

- Han to Chewbacca about their stolen Shuttle Tydirium

When I was a kid, when I couldn't get my hands on one of the Star Wars toy spaceships, I had to build my own with LEGOs. All I had was a huge pile of random colored bricks, but with a little imagination and a long afternoon, the design somehow came together. The best part of using LEGOs instead of the real toys was that these ships could be completely destroyed when they crashed into the wall and I didn't have to worry about my parents screaming at me. Well, kids today have it a bit easier, since LEGO now makes entire construction sets for the most popular Star Wars ships, like this cool new LEGO Star Wars Lambda-Class Imperial Shuttle.

When construction is complete, this massive, 2503 piece LEGO Imperial Shuttle measures a whopping 28" tall on the stand and 22" wide when with wings are deployed. It features rotating double laser wing cannons, gear-driven folding wings, a four-seat cockpit, detachable landing gear, a stand for display in flight or landing modes, a labeled display plaque, and minifigures: Darth Vader, Shuttle Pilot, Imperial Officer, Stormtrooper and Luke Skywalker. Although it was originally the Emperor's private transport, he's unfortunately not included.

► Amazon.com
► LEGO.com
As an Amazon Associate we earn from qualifying purchases. When you buy through links on this site, we may earn an affiliate commission.