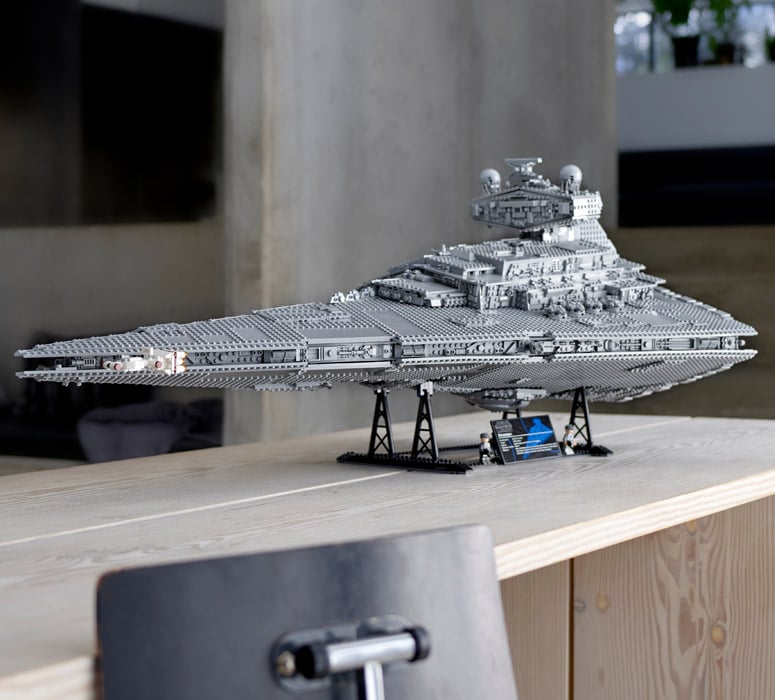 Next: Magnetic Lint Holder Bin For the Laundry Room

C-3PO: But Sir. The odds of successfully surviving an attack on an Imperial Star Destroyer are approximately...

Are you a Star Wars fan with plenty of extra time on your hands? This cool new LEGO Imperial Star Destroyer should keep you very, very occupied for quite awhile. This truly massive LEGO model of the Imperial Star Destroyer, The Devastator, featured in the opening shot of Star Wars: A New Hope consists of 4,784 mostly grey pieces and when / if completed measures in at whopping 3.5+ feet long. Yes, it includes a stand. This gigantic star of the Emperor's Imperial Navy features intricate surface detailing, swiveling Turbo Lasers, a tilting radar dish, huge engine exhausts, Imperial officer mini figures, and even a buildable mini-model of the Tantive IV Rebel Blockade Runner to chase down and capture.

If you ever finish it, it's definitely a stunning display piece to put on display or you can just crash it into the equally huge 7541 Piece LEGO Millennium Falcon and the 3441 Piece LEGO Death Star II for the single most incredible mess of plastic bricks ever imagined in this galaxy!

Hey LEGO! Where's the model of the actual largest spaceship in the entire known universe, Dark Helmet's Spaceball One from Spaceballs: The Movie!?

► LEGO.com
► Check Amazon.com
As an Amazon Associate we earn from qualifying purchases. When you buy through links on this site, we may earn an affiliate commission.